History and Role of the piano in the Modern World 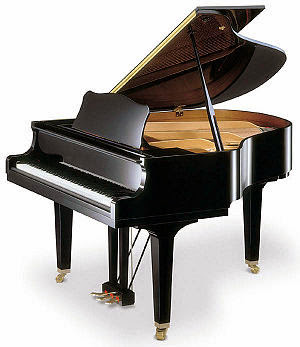 The modern piano developed its form from two keyboard instruments, the clavichord and the harpsichord, which originated from early in music history. These keyboard instruments operate on the principle of direct connection between the applied force or pressure of the player on the keys, and the volume of sound. Meaning, the harder the pressure or force the player applies on the keys, the louder the sound of the instrument, the lighter the touch, the softer the sound.

Earlier musicians, however, encountered a problem with the clavichord and harpsichord: the sound was relatively diminutive as compared to how they would have wanted it to be, considering the fact that keyboard instruments were often played in large rooms (chambers), cathedrals and churches.

Around the year 1700, Italian instrument maker Bartolomeo Cristofori (1655-1731) created the new keyboard instrument and coined its name from the fact that it could both play "piano" (soft) and "forte" (loud), addressing the problem of the old keyboard instruments. Thus, the pianoforte, or what we call shortly now as the piano.

Aside from the direct connection between the fingers on the keys and the sound, the piano also has two different pedals which are the “sustain” or damper pedal and the “soft” pedal. The sustain pedal allows the pianist to hold the tone or sound even after releasing the key. The soft pedal veils or muffles the sound. There is also a third pedal called the “sostenuto” pedal. However, not all pianos have this.

The role of the piano in the modern world is very versatile. The piano can cover a wide range of musical types from classical to pop to jazz. It can cater to a wide variety of audiences from music connoisseurs in concerts or artists in theatres, to children and pupils in pre-schools. Very noticeably too, piano students can very well play other instruments as well, even without its formal training.

The piano is also a very relevant tool in the culture of society. Since the turn of the 20th century, many households have been able to acquire their very own piano. From this assessment, we can infer that modern society believes in the benefits of studying music and piano in particular.

In almost every gathering (social, religious and even political), one cannot undermine the important role of music. It expresses ideals. It bonds the youth. It provides for a positive, productive & creative channeling for this generation's aggression and collective angst.

The importance of music on the development of a person, and eventually, of society cannot be understated. Perhaps its time to rethink how this important element of cultural and social development in our society has been treated.