Arthur Rubinstein (1887 - 1982) was a Polish pianist and one of the great virtuosos of the 20th century. He was declared a child prodigy at the age of four and had perfect pitch. By the age of thirteen, he had already made his debut with the Berlin Philharmonic.

He toured all over the world during his long life. There may have been other pianists that could play a certain piece or composer with more insight, but everything Rubinstein played was rock-solid in interpretation and technique. His tone was golden, he was incapable of producing a harsh tone from the piano. His repertoire was huge. For example, he could perform in short notice 27 different piano concertos. He was also an excellent chamber music musician.

He made recordings from 1928 to about 1976, with most of his recordings being done for RCA. all of his RCA recordings have been issued on music CD, the entire set contains 94 CD's and runs to 106 hours. He concertized until his eyesight failed him and he retired in 1976 at age eighty-nine. His last concert was in Wigmore Hall in London where he had first played nearly seventy years previously.

Rubinstein is most well known for his Chopin performances. Rubinstein was one of the first pianists early in the 20th century to play Chopin as the music was written. That's not to say he played it coldly and analytically, but Rubinstein purposefully rids himself of the excesses in performance and interpretation that had become somewhat of a tradition in Chopin's music. There is no better player of Chopin's 2nd sonata than Rubinstein. He plays with expression and passion that totally serves the music.

Chopin's 2nd sonata confused music lovers when it was first published in 1837. Schumann said it lacked cohesion and Chopin "simply bound together four of his most unruly children." The sonata is in 4 movements and follows the layout of Beethoven's Piano Sonata #12, which was one of Chopin's favorite Beethoven sonatas. The sonata opens with what some have called a tribute to Beethoven, as it is very similar to Beethoven's opening of his final piano sonata, Opus 111 in C minor, another favorite of Chopin.

The second movement is a scherzo, the third movement is the famous Funeral March. The enigmatic final Presto movement has been subject to many interpretations. In the preface to the American edition of the sonatas, James Huneker quotes from Karol Mikuli, the editor of the sonatas and one of Chopin's pupils, that Chopin said of this movement, "The left hand and right hand are gossiping after the March". Arthur Rubinstein himself said of the movement that, "One hears the winds of night sweeping over churchyard graves, the dust blowing and the dust that remains."

Posted by Werner Cappel at 12:13 PM No comments: Links to this post 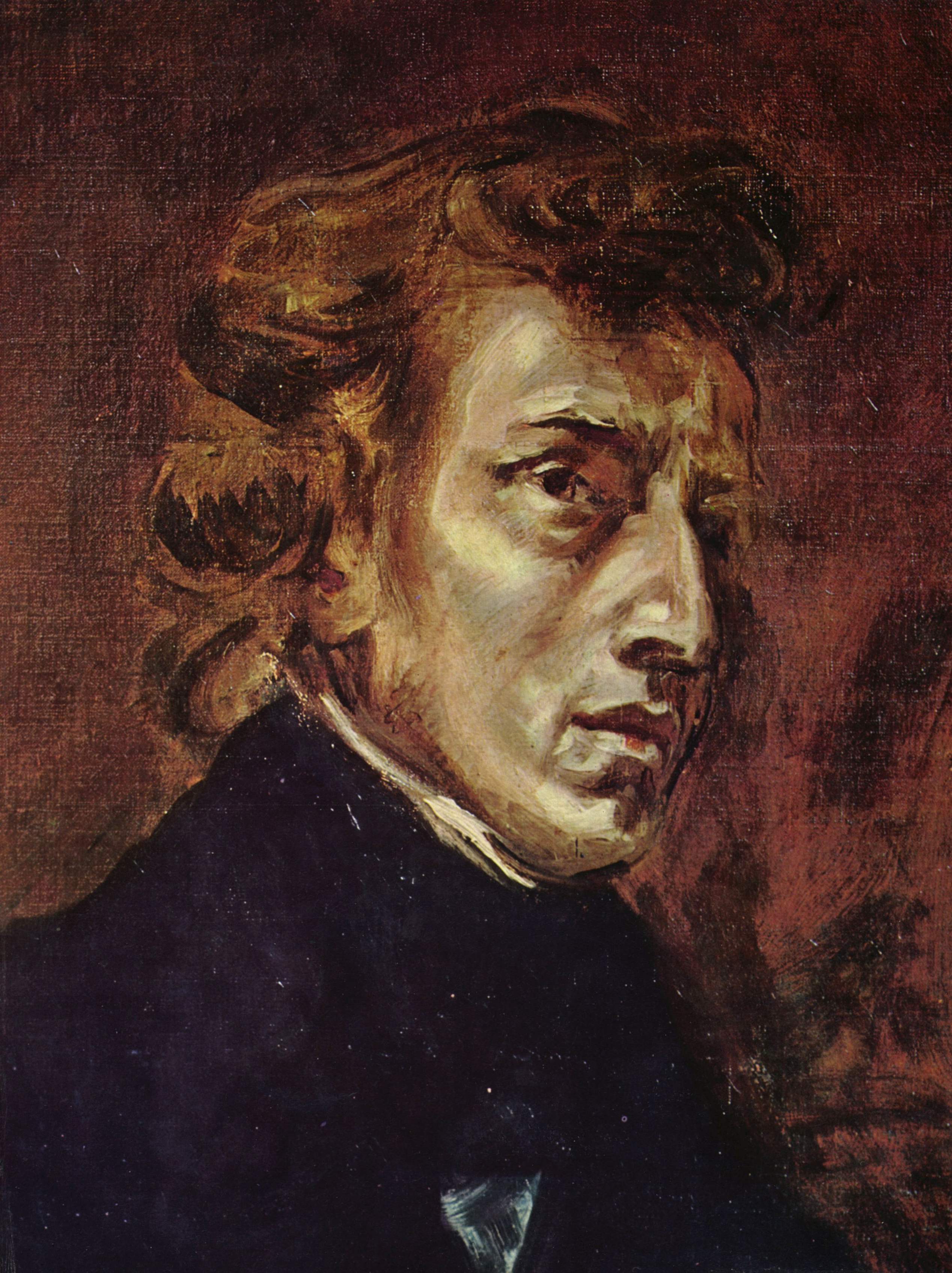 "Chopin at 28" by Eugène Delacroix
Licensed under Public Domain via Wikimedia Commons.

Fryderyk Franciszek Chopin, the Polish composer, and pianist was born either on either February 22, or March 1, 1810, in the village of Zelazowa Wola near Sochaczew, in the region of Mazovia, which was part of the Duchy of Warsaw. His father, Mikolaj (Nicolas) Chopin, was born in 1771 in Marainville, France. When he was 16, Mikolaj permanently moved to Poland permanently, never returning to France, nor keeping contact with his French family. He married Tekla Justyna Krzyzanowska in 1806. Fryderyk was the second of four children. Several months after his birth, the whole family moved to Warsaw, where Mikolaj Chopin was offered a better job.

Chopin was a child prodigy, even being compared to Mozart. By the age of seven, he had already written his first two Polonaises. His received publicity, giving receptions and benefit concerts in this early age. He outgrew his first teacher by the time he was 12. After this, he received instruction from Wilhelm Wuerfel, a famous pianist, and teacher at the Warsaw Conservatory.


From 1823 to 1826, while attending the Warsaw Lyceum, where his father taught, he spent his summer holidays in the countryside, visiting Szafarnia in the Kujawy region. It was here where he became interested in Polish folk music, with its distinct tonality, the richness of rhythms and lively dance. He composed his first mazurkas in 1825, but his love for Polish folk music would continue to have an influence on him for the rest of his life.

In the autumn of 1826, Chopin began studying the theory of music, figured bass and composition, and counterpoint at the Warsaw School of Music, under the composer Jozef Elsner (b. 1769 in Silesia). Already possessing immeasurable talent, it was in this time that Chopin greatly advanced in compositional skill, demonstrating these advances in his first extended works, also written at this time. He graduated in 1829, receiving this report from his teacher: "Chopin, Fryderyk, third-year student, amazing talent, musical genius".

After completing his studies, Chopin spent some time outside of Poland, in Bad Reinertz, in Berlin, and Vienna, where he gave concerts and received high praise from the public for both his performances and his compositions. On November 2, 1830, he moved to Vienna for eight months. He hoped to establish his popularity there but was hindered by the trauma of war developing in his home country. The Russians would, later on, take Warsaw, which was very disturbing for the 20-year-old Pole. Despite this, in this time his style developed, into something with more force and passion, seen in his Concerto in E minor, and the Etudes from op. 10.

In the autumn of 1831, after a stop in Munich, Chopin came to Paris, where he met many fellow Poles, who had chosen exile after the war. Chopin made close contacts with the so-called Great Emigration, attending meetings, playing at charity concerts held for their poor, and organizing similar events. In Paris, his reputation as an artist grew rapidly, and he became friends of Liszt, Mendelssohn, and Berlioz. He also gave lessons to the wealthy French and Polish. Because he decided to identify with the immigrants in Paris, and not to conform to the Russian regulations at this time, he was not allowed to visit Poland, to see his family, but was able to meet them outside of Poland in 1835, in Karlsbad. After this, Chopin visited friends of his family, where he also fell in love with their daughter, whom he was later engaged to secretly, only later to be deemed unsuitable by her parents because of his irregular lifestyle. In an attempt to forget these unpleasant memories, Chopin traveled to London in July 1837.


Soon afterward, he entered into a close relationship with George Sand, the famous French writer. The lovers spent the winter of 1838/1839 on the Spanish island of Majorca, where, because of the weather, Chopin became very ill, showing symptoms of tuberculosis. For many weeks, he stayed at home sick but managing to compose. After returning to France, Chopin would spend long vacations in George Sand’s summer manor in Nohant, in central France. This is where he wrote most of his greatest works and was the happiest. For years their relationship continued, was ended after a bitter quarrel, involving Sand’s daughter, in July 1847.

This had a horrible effect on the health and creativity of Chopin. Almost giving up composition altogether, from then on, he only wrote a few miniatures. In April 1848, he left for England and Scotland, under the persuasion of his Scottish pupil, Jane Stirling. In Scotland, the hectic schedule of performance and traveling took its toll on the fragile Chopin’s health. On November 16, 1848, despite frailty and fever, he gave his last concert in London, returning to Paris a few days later.

His rapidly progressing disease made it impossible to continue giving lessons. In the summer of 1849, his older sister came from Warsaw to take care of him. On October 17, 1849, Chopin died of pulmonary tuberculosis in Paris. His body was buried in Paris, but upon his orders, his sister brought his heart to Warsaw, where it was buried was placed in an urn installed in a pillar of the Holy Cross church in Krakowskie Przedmiescie, one of the main streets in Warsaw.

Posted by Werner Cappel at 10:33 AM No comments: Links to this post