The Little Heard Cousin of the Trumpet - CORNET 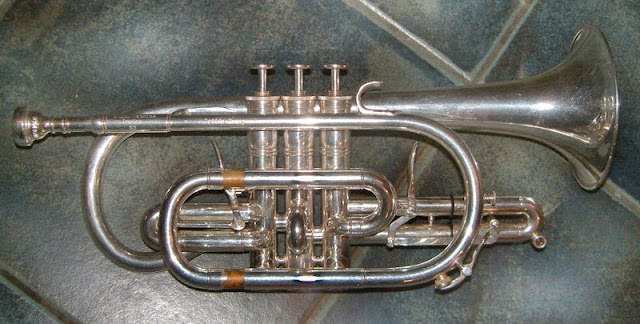 The cornet is an instrument that is a member of the brass instrument family. Its appearance is close to that of the trumpet in its design. The tubing is wrapped in a clever way that will allow the musician to easily carry and play the instrument, and the tube's diameter increases in size until the end. It is a common mistake for people to believe that the cornet has originated from the medieval cornett, but in truth, there is no relation. In fact, the cornet originated from the simple horn, just as the bugle was. The cornet really developed when the improvements on piston valves were made, which was in the early 1800s.

Today, the cornet is a fairly popular instrument that is used in concert bands and brass bands more than it is used in marching bands and military, though it can sometimes be used in these too. Referring back to the valves of the cornet, they really were the largest part in bringing in the creation of the cornet. In fact, it was in adding these valves to the horn in the early 1800s that the actual cornet was first invented. While the cornet would seem similar to the trumpet, they differed greatly for a while before the trumpet also had the valves added into its design. Today, they are so similar that the coronet and the trumpet can play the same notes and fingerings.

The cornet has not changed too much since it was first invented, and it has only been around for a couple hundred years, but it is a brass instrument that has received a decent amount of interest over the years. One can see it played in a number of different musical genres and people of different ages have given it a try. In fact, a number of young jazz musicians in the 1900s began their careers by learning how to play the cornet.

The cornet has a more mellow and warm tone that is attractive to many people who decide to learn how to play the instrument. It is also an instrument that is recommended for beginners who have never played a brass instrument before. It can be a little challenging at first for someone who is new to playing any kind of wind instrument, but it can be quite rewarding in the end. Learning the sheet music and how to manipulate the keys properly can also take some time, but not as long as it can take to learn other more complex instruments. It is also another instrument that can be offered at some schools that have them.

Posted by Werner Cappel at 10:13 AM No comments:

As a performer, it is essential that you keep your instrument in pristine condition. Most players don't seem to be bothered about cleaning their instrument often enough. If you rely on your instrument to earn a living you may form a different opinion. It's a bit cut-throat out there and the difference between having a pure tone quality and a muffled uninteresting sound could mean the difference between getting the gig or not. Not to mention the hygiene problems that could develop.

were developed from basically a post horn, which over time was curled and developed into the form you see today. Valves were added which allowed more playable notes and dexterity of performance. It's the careful manufacturing and handwork that make it into a cornet that plays well. Take care of your instrument and it won't let you down.

There is nothing worse than being in the middle of a show and your valves or slides start to stick. It can ruin a perfectly good performance.

Cleaning the cornet should only take about 10 to 15 minutes of your time and the results are more than beneficial to your playing. You would be surprised at the "gunge" that appears out of the tubes after a good clean.

So let's begin. Run a warm bath - Yes a bath, and put a small amount of dishwashing soap into it. Check with your product information or your manufacturer's website to make sure before you use it. Pull all the valves and slides out of the cornet and place everything submerged under the water - Leave to soak for about 30 mins. That was easy! Note - you may have to disconnect the "triggers" on the first and third valve slides if they are fitted.

Now it's time to put the pull-through brush to work. Gently feed it into the tubes of the cornet and pull through the brush, watch out for the "Gunge". Do this a couple of times and then rise the cornet tubes out under running water until it runs clear. Do this now to all the removable slides as well.

Now using the valve brush we need to clean the valve casing. Just push the brush in and out a couple of times and all should be well. Now turning to the valves themselves. First of all you need to clean the internal surfaces of holes. You can also use the pull through for this but be careful not to scratch them. Using a Silver polish and the lint free cloth, now clean the valves outer surface, dry off and polish with a separate clean rag.

Now the Slides. Again using the silver polish clean the slides. If your cornet is of the lacquered type (brass looking) DO DOT use silver polish on the external surfaces. This attacks the coating. Finally, clean the inside surface of the valve caps both top and bottom again with a soft rag.

After all, the internals of the cornet is clean, its time now to clean the external surfaces, again remember if it is of the lacquered type just soap and water will clean it. Otherwise, on silver-plated surfaces use your metal.

Now it's time to re-assemble the cornet, oil the valves and 1st and 3rd valve slides, and grease the slides. If you have triggers on your instrument on the first and third slides it is better to use valve oil on them as they will move faster.

Posted by Werner Cappel at 8:00 AM No comments: Links to this post

TRUMPET or CORNET - Frustration Keeps Us From Answers!

Most answers are simple than what our minds will let us accept.  There have been many times that I've practiced something and it seems to fly out of the trumpet.  Usually what goes through my mind is "it can't be that easy, I've been struggling so long with this!"

The quick answer is - yes, it can be that easy.  Most people let the simple solutions escape them because of built up notions of complexity.  Something that isn't performed easily within the first few tries, becomes more and more frustrating to the cornet/trumpet player.  From double tonguing, high notes, better tone, playing pianissimo, controlling rhythm, performing difficult passages in a piece of music, learning scales, etc.  These can all present challenges to each individual trumpeter or cornetist.

Working on major scales for younger students can be not only boring, but a daunting task because they are looked at as difficult in many ways.  The F sharp major scale is one that has most notes sharp (or raised half step).  What most students don't think about is that there are only 7 notes in each major scale.  The F sharp scale has 6 sharps, so why not focus on the one natural?  By practicing slowly and taking each note one by one, within a few practice sessions, this scale becomes easier.  Within a week, the scale can be memorized.  Within a month, it will play as easily for the trumpet student as the C major scale with no sharps or flats.  Again - tenacity and patience!

Posted by Werner Cappel at 9:12 AM No comments: Links to this post