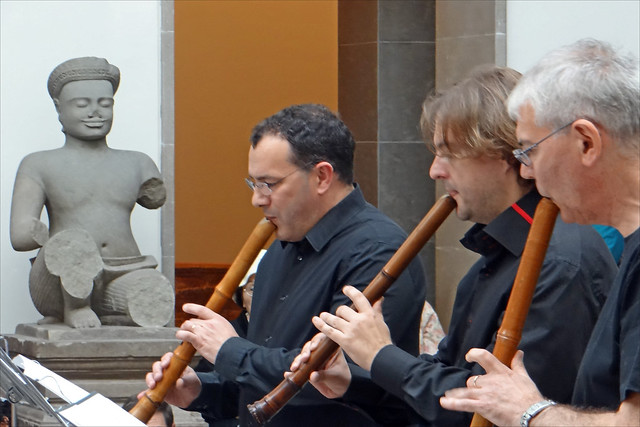 The shakuhachi is a Japanese end-blown flute. It is the Japanese most well-known woodwind instrument. The shakuhachi flute (or also known as Zen flute) is used by Zen Buddhist as a tool for meditation as well as playing jazz, classical and traditional Japanese folk music. This flute is made from the very bottom of a bamboo tree, but versions now exist in ABS and hardwoods.

Although the bamboo flute is quite simple in appearance, it is very difficult to play; its unique and magical quality is revealed to the listeners by the purity of its tone. In the hands of a master, the flute produces an extraordinary, subtle, sensual music – prized as being perfect for meditation and relaxation. Its beautiful, soulful sound made it popular in 80’s pop music in the English-speaking world.


The name shakuhachi is derived from the term “isshaku hassun” meaning one shaku and eight suns (1.8 Japanese feet). Usually, the term shakuhachi refers to the standard size instrument, which is 54.5 cm in length, but it can also refer to many different sizes ranging from 1.3 – 2.5 shaku (39.4 – 75.7 cm) and longer. The shakuhachi is usually made from the root portion of a thick-walled bamboo (known as madake in Japanese).

There are two contrasting styles of making these instruments: the first involves using a style that is similar to the Zen Buddhist monks from the past. There is no filler in this shakuhachi and it is also sometimes called as ji nashi or hocchiku. If you look down the bore of a ji nashi, you can see some nodes of the bamboo protruding. While the second style has a filler made up of a certain mixture of ingredients, possibly including a powder called tonoko, lacquer or urushi and water. This is finished to create a polished surface.


Shakuhachi can be made in one piece (it is called as nobekan) or in two pieces with a middle joint (this also called as nakatsuki). Two of them has no difference in quality, only the two piece is easier to transport and often contains filler. The top part of shakuhachi is called utaguchi – literally ‘song mouth’, and this contains an insert made of various materials such as buffalo horn, ivory and plastic. Its shape is based on the preference of different schools.


Shakuhachi flute is possibly the simplest non-percussive instrument ever conceived. This instrument has no keys or pads like a western flute, no strings like a violin or guitar, no mechanism inside like organ or piano, no reed like a clarinet or saxophone, it does not even have a mouthpiece like a recorder. Zen flute has only five finger holes, which is fewer than the penny whistle or much other wind instruments. To play a note, your mouth and lips must become part of the instrument. Despite this simple construction, this instrument can produce an inconceivably broad range of musical sounds

The Zen flute came from China to Japan sometime in the 6th century. The instrument was then adopted by a sect of Zen Buddhist monks around the 15th century. During this period, the flutes began to be made from the spiked root section of the bamboo – so the flute could double as a particularly ferocious weapon. That probably explains the flute’s long association with the martial arts.

Posted by Werner Cappel at 9:37 AM No comments: